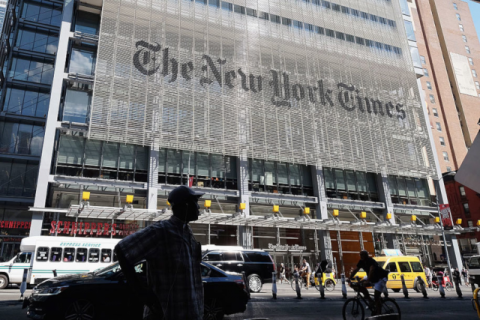 In a highly misleading article, The New York Times is attempting to rewrite the dismal history of the Trump administration’s miserable failure regarding vaccine production and distribution. It’s a  transparent effort to imply an equivalence with the Biden administration’s actions; Daily Kos’ Mark Sumner dives into the broken system left by Donald Trump, while the Times’ bogus headline blares, “Biden Got The Vaccine Rollout Humming, With Trump’s Help.”

The piece, authored by Sharon LaFraniere, begins by halfheartedly acknowledging the Biden administration’s “public relations” victory in “conjur[ing] an image of a White House running on all cylinders and leaving its predecessor’s effort in the dust,” but sternly advises us that the truth, if only we were correctly informed, would present a more “mixed picture.”

That “mixed picture,” however, gets off to a strangely unsatisfying start in LaFraniere’s piece.

First, the author notes that even before inauguration, the Biden team had announced it would be invoking the Defense Production Act to provide Pfizer the equipment necessary to expand its plant in Kalamazoo so as to roll out its vaccine at a rate far surpassing its capabilities up to that time. She then notes that Biden’s administration essentially forced Johnson & Johnson to lean heavily on a subcontractor to increase the rate at which the vaccine itself was being bottled and packaged, enabling the pharmaceutical giant to produce vaccines by May of this year.

Nevertheless, LaFraniere contends, Biden owes the Trump administration gratitude for its prior “efforts.”

At the same time, though, Mr. Biden benefited hugely from the waves of vaccine production that the Trump administration had set in motion. As both Pfizer and Moderna found their manufacturing footing, they were able to double and triple the outputs from their factories.

LaFraniere notes that both Pfizer and Moderna were so well-situated “less than a month” after Biden assumed office, they were announcing production rates of double and triple their prior estimates. She attributes this increased pace of production to groundwork laid by the prior administration. And that is where the sum of her analysis completely evaporates.

LaFraniere relies on exactly one Trump administration source to justify the premise of her article.

“They criticize what we did, but they are using our playbook every step of the way,” said Paul Mango, the Trump administration’s deputy chief of staff for health policy and a senior official in the crash vaccine development effort then known as Operation Warp Speed. He said Mr. Trump’s team oversaw the construction or expansion of nearly two dozen plants involved in vaccine production and invoked the Defense Production Act 18 times to ensure those factories had sufficient supplies.

Mango is quoted multiple times in LaFraniere’s drive to illustrate that the Trump administration is being unfairly maligned by the press for its lackadaisical efforts to increase vaccine production. However, she makes no attempt to verify his aggrieved statements and appears to simply accept them at face value while backhandedly acknowledging that “corporate, state and federal officials agree that Mr. Biden’s White House has been more active than his predecessor’s in trying to build up the nation’s vaccine stock.”

Believe it or not, this ends LaFraniere’s foray into what the Trump administration did or did not do to accelerate vaccine production. Yes, the Times published an entire article boldly declaring that the Biden administration owes Trump a debt of gratitude, and the only supporting piece of evidence for this astonishing assertion is an unsourced and unverified quotation from a former Trump official.

That’s it. Read it yourself.

LaFraniere does acknowledge a key, contradictory bit previously reported by the Times.

Pfizer officials privately suggested that the Trump administration not only was wrongfully bad-mouthing the company but also had refused for months to invoke the Defense Production Act to order suppliers to prioritize Pfizer’s needs, as it did for the other vaccine developers under federal contract.

But the true act of journalistic malfeasance here is one of omission. LaFraniere neglects to mention that the Trump administration had, as early as July of last year, previously refused to pre-authorize Pfizer to roll out as many as 500 million doses of their newly developed vaccine. This colossal blunder had the perverse effect of allowing Europe to receive the vaccine before the U.S., where Pfizer is based. The omission is even more bizarre considering that LaFraniere broke that story on Dec. 7, 2020, with Times reporters Katie Thomas and Noah Weiland.

Before Pfizer’s coronavirus vaccine was proved highly successful in clinical trials last month, the company offered the Trump administration the chance to lock in supplies beyond the 100 million doses the pharmaceutical maker agreed to sell the government as part of a $1.95 billion deal months ago.

But the administration, according to people familiar with the talks, never made the deal, a choice that now raises questions about whether the United States allowed other countries to take its place in line.

Despite repeated warnings from Pfizer officials that demand could vastly outstrip supply and amid urges to pre-order more doses, the Trump administration turned down the offer, according to several people familiar with the discussions.

This information never appears in LaFraniere’s latest piece. Did it just not fit in with her goal of giving sole credit to Donald Trump?

Let us, then, do her homework for her, specifically regarding her solitary Trump administration source, Paul Mango. On Jan. 31, Stat News reported that Mango and other Trump administration officials engaged in deliberate and calculated efforts to hobble the vaccine distribution rollout.

Top Trump officials actively lobbied Congress to deny state governments any extra funding for the Covid-19 vaccine rollout last fall — despite frantic warnings from state officials that they didn’t have the money they needed to ramp up a massive vaccination operation.

The push, described to STAT by congressional aides in both parties and openly acknowledged by one of the Trump officials, came from multiple high-ranking Trump health officials in repeated meetings with legislators.

Without the extra money, states spent last October and November rationing the small pot of federal dollars they had been given. And when vaccines began shipping in December, states seemed woefully underprepared.

Who was the chief instigator of this callous effort to deny states the very funds they absolutely needed in order to distribute the vaccines? Paul Mango.

Much of the lobbying push came from Paul Mango, the former deputy chief of staff for policy at the Department of Health and Human Services. He argued, repeatedly, that states hadn’t demonstrated they needed additional funding because, at least as of last October, they hadn’t spent the $200 million that the Centers for Disease Control and Prevention sent to states in September.

To recap: The Times published a blatantly misleading article designed to create a phony “equivalence” between the Biden and Trump administrations’ efforts on vaccine production. The lead reporter on that story omits a key piece of contradictory information—which she herself previously reported—and relies solely on the unverified claims of a piqued and disgraced Trump administration official, who in fact was responsible for deliberately delaying the ultimate distribution of the COVID-19 vaccine to millions of Americans.

This is journalistic malpractice by The New York Times, pure and simple.