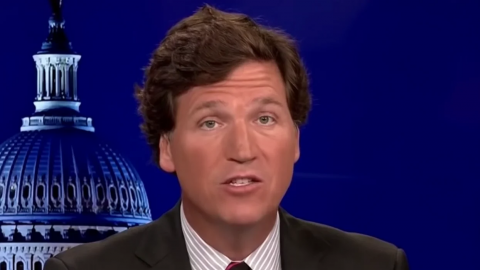 “When did our public schools, any schools, become what are essentially grooming centers for gender identity radicals?” Ingraham asked, as Media Matters reported. The chyron was less ambiguous: “Liberals are sexually grooming elementary students.”

“Teachers are inclined, particularly men because men are predators, to pedophilia,” Mamet charged, pointing to no study that proves his claim.

“I don’t understand where the men are. Like where are the dads? You know, some teachers pushing sex values on your third grader why don’t you go in and thrash the teacher? Like this is an agent of the government pushing someone else’s values on your kid about sex, like where’s the pushback?

But Insider reports that Carlson was “repeating calls for violence he has made previously.” And The Daily Beast apparently agreed: “The Fox News host yet again suggested that violence against educators is called for.”

Rather than apologize for its hosts and guests, Fox News is doubling down. Monday morning the conservative outlet published an article claiming: “CNN, Washington Post, Vice and more fret that Republicans are worried about child grooming, pedophilia.”

On Twitter, Media Matters Matthew Gertz adds to points he made in his article.

“Florida’s ‘Don’t Say Gay’ law effectively deputizes the most Fox-News-and-Facebook-addicted members of the GOP base to act on frenzied smears that LGBTQ teachers are ‘grooming’ children,” he writes.

“This vague law is then enforced by parents suing their school districts. Suits will inevitably come from the most anti-LGBTQ parents, and school districts will chill discussion of a wide range of topics to try to avoid getting mired in lawsuits,” Gertz adds.

“These baseless accusations that the right’s political opponents are actually pedophiles overlap with – and at times become indistinguishable from – the QAnon conspiracy theory,” he concludes, “which is moving ever closer to the GOP mainstream.”