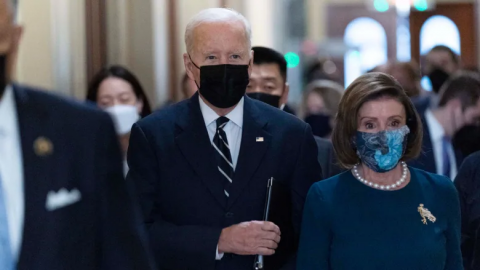 In February 2021, the month after President Joe Biden took office, unemployment was 6.3%, and the nonpartisan Congressional Budget Office projected that it would take until the end of 2023 for the nation to reach 4.6% unemployment.

In March 2021, Congress passed the $1.9 trillion American Rescue Plan to stimulate the economy, which had withered during the coronavirus pandemic. The plan extended unemployment benefits and provided stimulus payments to individuals. It increased food stamp benefits and significantly expanded the Child Tax Credit, putting money in parents’ pockets. It provided grants to small business and local, state, and tribal governments. It provided money for schools, housing, and healthcare.

Not a single Republican voted for the measure.

Today, the Bureau of Labor Statistics released its October monthly jobs report, and the news was good. The country added 531,000 new jobs, and numbers for previous months were revised to take more complete data into account. They show that there were 235,000 more jobs created in August and September than had previously been counted. Today’s news says that the U.S. economy has reached 4.6% unemployment two years ahead of schedule.

Since Biden took office, the U.S. has added more than 5.6 million jobs. This reflects the rebound from the lows of the pandemic, and it means that Biden added more jobs in the first 9 months of his presidency than the last three Republican administrations, covering 16 years, combined. The news created a rally on the stock market. The Dow Jones Industrial Average, the S&P 500, and the Nasdaq Composite, all ways of measuring the stock market, all closed at record highs, a powerful sign in light of the fact that right-wing politicians have insisted that Biden’s policies would hurt the economy.

“Bold fiscal policy works,” Treasury Secretary Janet Yellen wrote on Twitter. “A rebound like this was never a foregone conclusion. When our administration took office back in January, there was a real risk that our economy was going to slip into a prolonged recession. Now our recovery is outpacing other wealthy nations’.” She credited the American Rescue Plan and Biden’s immunization campaign, which has vaccinated 193 million Americans against the novel coronavirus, for the recovery.

Turning the obscene right-wing rallying cry “Let’s go, Brandon” on its head, Biden supporters today got #ThankYouBrandon trending on Twitter throughout the day.

The new numbers also show that women are still not reentering the workforce in numbers that reflect the pre-pandemic era. Experts think that the lack of safe childcare and concerns about schools are keeping women out of the workforce. The administration’s Build Back Better infrastructure bill would address these concerns, and after months of complicated negotiations, Biden has put a huge push today to get the House to advance the measure.

The Build Back Better bill is paired with the smaller bipartisan infrastructure measure, and this morning Republicans tried to adjourn Congress rather than allow the Democrats to bring them up. Their efforts failed, and House Democrats negotiated all day as House Speaker Nancy Pelosi tried to hammer down the last details while President Biden put pressure on lawmakers to pass both the bipartisan infrastructure bill and the Build Back Better measure.

As they worked, there was a little more fallout from Tuesday’s election. In New Jersey, where Democratic governor Phil Murphy won, Republican challenger Jack Ciattarelli has refused to concede. While Ciattarelli has said he only wants to make sure all legal votes are counted, Donald Trump Jr., the eldest son of the former president, shared Ciattarelli’s video asking people to wait before accepting Murphy's victory and added: “Nothing to see here folks, just a blatant crime being committed!”

In Virginia, governor-elect Glenn Youngkin’s 17-year-old son tried twice to vote despite being too young. This was unfortunate because his father had emphasized “election integrity” in his campaign, announcing that he would create an “Election Integrity Task Force” that would work “to ensure free and fair elections in Virginia.”

Also on the Hill today, Jeffrey Clark, the Department of Justice attorney who championed then-president Trump’s efforts to get the 2020 election overturned, cut short his deposition before the House Select Committee to Investigate the January 6th Attack on the U.S. Capitol.

After about 90 minutes, Clark handed the committee a 12-page letter saying he would not answer questions because while he held office, former president Trump was entitled “to the confidential advice of lawyers like” him. That meant that Clark “is subject to a sacred trust—one that is particularly vital to the constitutional separation of powers.” This vague and odd declaration is seemingly intended simply to buy time. Clark clearly doesn't want to talk, but he also doesn’t appear to want to plead the Fifth Amendment, which would cement the idea that he has committed crimes. Trump has not asserted executive privilege over his conversations with Clark and indeed couldn’t, for a number of reasons.

After being at it all day, tonight, President Biden, House Speaker Pelosi, the progressive Democrats, and centrist and conservative Democrats hammered out an agreement on the infrastructure measures. Centrists promised in writing to support the Build Back Better Act the progressives want as soon as they get confirmation from the Congressional Budget Office that it will cost what the White House says it will (ironically, the CBO says the bipartisan measure they like will cost $256 billion) and to work to come to a new compromise if it doesn’t. With that assurance, Pelosi had enough progressive votes to pass the first of the two infrastructure bills.

At about 11:30 p.m., the House of Representatives passed the $1.2 trillion Infrastructure Investment and Jobs Act (H.R. 3684) by a vote of 228–206. Biden promised to pass a bipartisan measure and after nine months of hard work, he did it: thirteen Republicans voted in favor of the bill; six progressive Democrats voted against it. The measure had already passed the Senate, so now it goes to his desk for a signature.

The Guardian’s congressional reporter, Hugo Lowell, noted: “Regardless of the politics, the passage of a $1.2T bipartisan infrastructure bill is a towering legislative achievement for Biden—and one that Trump never came close to matching.