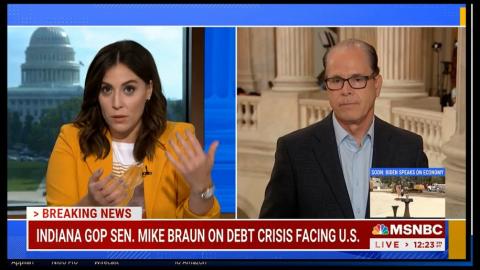 MSNBC Host Hallie Jackson did not allow Republican Senator Mike Braun to lie to Americans over their debt ceiling hostage-taking.

Hallie Jackson asked Senator Mike Braun about not supporting increasing the debt ceiling. The Senator began bloviating. He wanted her audience to believe that the debt ceiling increase somehow had something to do with President Joe Biden's Build Back Better bills.

Hallie Jackson would have none of it. She challenged him.

"Let's be super clear, Senator," said an admonishing Hallie Jackson. "Raising the debt ceiling is about not defaulting on the money already spent, that was spent under somebody you supported—your party's former leader, Donald Trump. Those were bills that President Trump and that Congress racked up that you now have to pay. How are you not going to do that?"

Sadly the facts are that Republicans blow up the budget more so than Democrats, and the following conclusion is from the data and analysis thereof.

The end-result is simple: Republican presidents add more to deficits than their Democratic counterparts.

There is a lot of nonsense said in election seasons and academics simply don’t have enough time to produce a peer-reviewed study to address politicians’ claims in a timely manner. This analysis is an attempt to address such claims in real time, using transparent data and methods that can be verified and reproduced by others.

We must stop the spin. It damages us all.