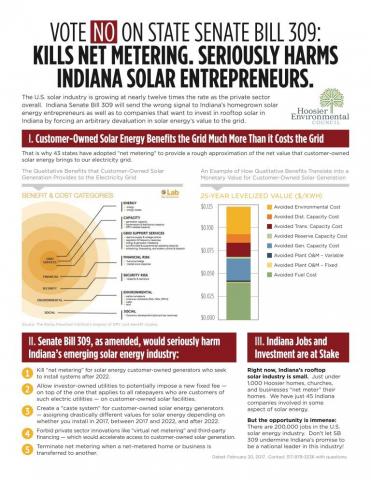 I know it’s hard to take our eyes off the mounting disasters in D.C., but let’s take a moment to talk about Indiana. Specifically, let’s talk about Senate Bill 309, sponsored by Senator Brandt Hershman. (It’s always wise to look carefully–and skeptically– at anything Hershman sponsors.)

Senate Bill 309 is about “distributed energy generation.” (If your eyes already glazed over, that was the intent.) What it is really about is the protection of electric monopolies at the expense of consumers.

Let’s say you have rooftop solar, and you currently have “net metering.” Net metering is a term that refers to a billing arrangement between you and the electric utility; when your rooftop panels are generating more energy than you are using, the excess goes back into the grid, and the utility credits you for that excess at the same rate that you pay them when you aren’t generating enough to cover your needs and you buy the rest of what you need from them.

Even if it is an even swap, you still pay the utility an amount sufficient to cover its overhead costs–billing, meter reading, etc. Fair enough.

Most studies of this growing practice have concluded that net metering benefits the grid and other customers, as well as the environment. As Citizens Action Coalition explains,

But what are those benefits when weighed against diminished profits for electric monopolies? In Senator Hershman’s calculus, not much.

If Senate Bill 309 passes, you will no longer be able to use the electricity from your rooftop solar panels and sell any excess back to the utility. Instead, you would be forced to sell all the electricity you generate to the utility at a much lower price than the utility charges you, and then buy back what you need at their substantially higher “retail” price. (The utilities will have to pay you at something called the “avoided cost” rate–which is somewhere between 2.5 and 4.5 cents per kilowatt hour.–You’ll have to buy it back at retail rates between 11 and 16 cents per kilowatt hour.)

Nice work if you can get it!

If SB 309 passes, it will price rooftop solar and small-scale wind generation out of the market.

During just the last five years, over a million Americans have installed solar, and the costs of both solar and wind generated energy have dropped dramatically. That’s good for the environment, and good for consumers’ pocketbooks, but it has cut into the profit margins of the big electrical utilities.

Fortunately for them, those big monopolies have good friends like Senator Hershman in the Indiana General Assembly.
Consumers, unfortunately, do not.
(Sheila Kennedy, sheilakennedy.net,1/3/17)