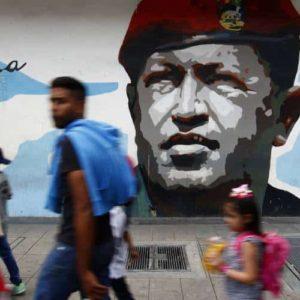 An excerpt of an interview by Roberto Sirvent with Justin Podur  and Joe Emersberger, coauthors of the forthcoming book Extraordinary Threat: The U.S. Empire, the Media, and Twenty Years of Coup Attempts in Venezuela.

Never underestimate how convincing, formidable and dishonest the propaganda apparatus is that supports US imperialism.

Roberto Sirvent: How can your book help BAR readers understand the current political and social climate?

While focused on Venezuela, and US-backed efforts since 2002 to overthrow Chavista governments, the lessons learned generalize. We touch other US-backed coups in the twenty first century, for example, the 2004 coup that ousted Jean Bertrand Aristide, the 2019 that ousted Evo Morales, and the 2009 coup that ousted Manuel Zelaya. Since 2018 the US has also been trying to oust the democratically-elected government of Daniel Ortega in Nicaragua. In fact it has also declared Nicaragua an “extraordinary threat” to the US. So you can see that the US and its allies do not re-invent the wheel when it comes to trying to overthrow governments…..

What do you hope activists and community organizers will take away from reading your book?

Aside from what we already mentioned above, we hope they learn never to underestimate the need to be extremely careful in assessing governments that the US government vilifies; and to never underestimate how convincing, formidable and dishonest the propaganda apparatus is that supports US imperialism. Nobody can follow closely every country the US wants to destabilize. It’s not always easy to discern how big a kernel of truth there is, if any, to US allegations against a state it has singled out as an enemy. We hope people read our book and come away feeling more comfortable suspending judgment when they can’t look into such allegations closely: and, if they don’t choose to look into them, to try very hard to find independent sources.

Moreover, we hope they realize that the allegations, even if true, can rarely justify war or the kinds of economic sanctions the US has imposed on Venezuela, which are essentially criminal acts of war….

In what way does your book help us imagine new worlds?

Chavismo is a strategy involving mass mobilization, constitutional reform, and elections to create a transition to socialism. It is clear enough that without the constant coup attempts and sanctions, Venezuela’s economy and political system would be far ahead of where it is now and an example for other countries in the hemisphere (Zelaya in Honduras was overthrown in 2009 for trying to use the same strategy).

By implication, our book shows that the democratization of mass media is key to any victory that can be won by anti-war, anti-imperial or generally progressive movements. Also, in order to address the way Venezuela has been smeared as a dictatorship, we ask people to recall the grave limitations on democracy in capitalist countries like the US and Canada.

The reason the mass media is insulated from the democratic process is because capitalist countries try to keep the democratic process out of the economy. Power over our lives is relegated by government to private sector tyrannies – whose abuses are abated to the extent unions are strong. A related problem we discuss a bit is that all countries require a professional class to do specialized work, and this class of workers is susceptible to internalizing the elitist assumptions of the most powerful people. This can happen even if that class of people is not doing great financially, or is even shrugging financially (like many journalists). So when these professional class people from rich countries go to report on the Global South, you not only have the professional class bias impacting their work but also the imperial bias that is sold to all of us by the mass media we consume.

Imagining new worlds is only possible to the extent that we can free ourselves from imperial propaganda – we aim to help you clear away the cobwebs.

Read this rich interview in full, at the Black Agenda Report Book Forum.