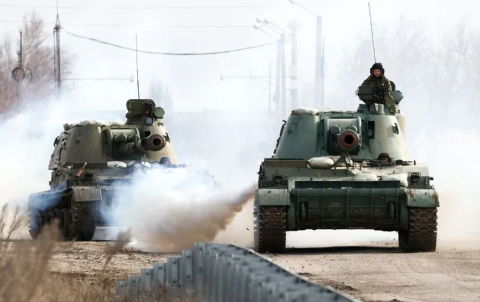 War is a tragedy, a crime, and a defeat. The Nation condemns the decision of Russian President Vladimir Putin to abandon the path of diplomacy by attacking and undertaking “special military operations” in Ukraine. These actions violate international law and fuel a dangerous escalation of violence.

We urge all parties to immediately cease hostilities, de-escalate, and seek a diplomatic solution to mitigate the risk of full-scale war and an unthinkable direct conflict between the world’s two largest nuclear powers.

The Nation has consistently called on all parties to the crisis in Ukraine to seek resolution through diplomatic means, respecting international law and international borders. Putin’s actions are indefensible, but responsibility for this crisis is widely shared. This magazine has warned repeatedly that the extension of NATO to Russia’s borders would inevitably produce a fierce reaction. We have criticized NATO’s wholesale rejection of Russia’s security proposals. We decry the arrogance that leads US officials to assert that we have the right to do what we wish across the world, even in areas, like Ukraine, that are far more important to others than they are to us.

NATO expansion provided the context for this crisis—a fact often ignored by our media. There is rank irrationality and irresponsibility in offering future NATO membership to Ukraine—when successive US presidents and our NATO allies have demonstrated that they do not have the slightest intention of fighting to defend Ukraine. Instead, Putin’s demand that Ukraine remain outside of NATO—essentially that the status quo be codified—was scorned as violating NATO’s “principle” of admitting anyone it wanted.

One immediate result was to encourage parallel irresponsibility in Ukraine. President Volodymyr Zelensky promised voters when he ran for Ukraine’s presidency in 2019 that he would pursue a path to peace and end the war in the Donbas. Upon taking office, however, his government refused to implement the provisions of the 2015 Minsk Protocols—signed by Russia, Ukraine, France, Germany, and the EU—that essentially would have guaranteed Ukrainian sovereignty and territorial integrity in exchange for Ukrainian neutrality.

Now, sadly, Russia’s illegal actions will embolden the hawks and armament-mongers on all sides. Already, armchair strategists are calling for doubling the US military budget, to grasp the “strategic opportunity” to bleed Putin in Ukraine, while pushing the Europeans to build up their military forces.

Amid the drums of war, we should not lose sight of the human horror that will follow, the massive displacement, the impact of sanctions not only on Russians but also on citizens in Europe, the United States, and elsewhere.

Ukrainians in the East are already suffering. If Russia occupies the separatist republics, it will find itself confronting perpetual strife and upheaval, fueled by the US and NATO. And if it attempts to occupy the whole of Ukraine, it may face a prolonged guerrilla war far more costly than the Soviet debacle in Afghanistan. The West’s “punitive” sanctions will hurt Russia, oligarchs, and ordinary Russians—but also Europe, the United States, and the global economy’s bystanders. Oil prices—already soaring past $100 a barrel—are a harbinger of that. A revived and more dangerous Cold War will ravage domestic budgets here and in Europe—and sap resources and attention needed to address pandemics, the climate crisis, and debilitating inequality.

What is needed is not a rush to arms and to hawkish bluster but a return to intense negotiations—at the UN, at the Organization for Security and Co-operation in Europe, and among the signatories to the Minsk Protocols. It is time to recognize that there remain options that, if pursued in good faith, could bring the current crisis to a peaceful conclusion.

We believe the crisis can and should ultimately be resolved by a declaration of Ukrainian neutrality and the withdrawal of Russian forces from the Donbas. To that end, we applaud the restraint shown by both France and Germany, and are particularly supportive of President Emmanuel Macron’s efforts to end the crisis. NATO or the OSCE might valuably take the initiative to open negotiations on creating a resilient new security architecture in Europe, one that engages Russia rather than threatens it, and reassures its neighbors rather than militarizes relations. That might sensibly include an end to NATO expansion, and a return to the Conventional Forces in Europe and Intercontinental Ballistic Missile treaties.

To President Biden, we say: American interests in Ukraine will never outweigh those of Russia; the US and NATO cannot and will not win a war on the ground against Russia in its own backyard; sanctions are unlikely to prevail and may indeed damage the American economy.

We urge President Biden and his administration to encourage and, if need be, help facilitate the hard but necessary work of diplomacy that is being undertaken by our allies in Paris and Berlin.

Katrina vanden Heuvel is editorial director and publisher of The Nation, America’s leading source of progressive politics and culture. She served as editor of the magazine from 1995 to 2019.