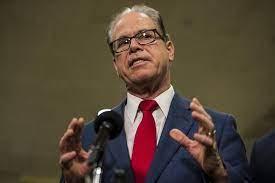 When the Federal Election Commission issued a draft audit showing that Braun’s 2018 Senate campaign broke multiple election finance laws, the senator had to choose between two possible defenses for his actions.

He could argue that he was incompetent.

Or he could acknowledge that he was corrupt.

Braun went with the first option.

He said he really wasn’t in charge of his own campaign or his own finances. He tried to blame the whole mess on a bookkeeper, Travis Kabrick, who—Braun’s team alleged—had “vanished.”

(An aside: The Daily Beast, which has done detailed reporting on this mess, found Kabrick in a matter of seconds. The reporters there apparently used some new, cutting-edge and hard-to-procure technology to track him down. It’s called Google.)

The Braun team now is doing its best to shovel the debris from this debacle under the rug, regardless of how large a lump it leaves in the carpet. The senator’s mouthpieces say that the FEC findings are only a draft audit, not the final product. They contend that documents the campaign has submitted will explain away all the problems and leave Braun looking as pure as a vestal virgin.

That will require quite a bit of explaining.

Among other things, the draft audit says the Braun campaign solicited and accepted more than $8 million worth of “apparent prohibited loans.” The campaign also failed to provide the legally required information for more than 1,000 donors. And the Braun campaign accepted nearly $2 million in contributions that were above legal limits.

The campaign also accepted $1.5 million from a company Braun founded and served as its chief executive officer. According to the FEC, that constitutes an illegal corporate political contribution. The campaign tried to account for the funds by calling them “compensation” for Braun, as redeemed stock and, at last, as a loan.

Those are significant offenses, but they aren’t the most egregious in the FEC draft audit.

According to that draft audit, the Braun campaign also paid the senator back money he had “loaned” to his campaign that exceeded legal limits.

His reimbursement amounted to more than $500,000 than he legally could claim.

If the FEC is right, that means Braun tried to turn running for office into a profit-making venture rather than a public service by having his campaign donors pay him back significantly more than he loaned his own campaign.

No wonder former President Donald Trump considered Braun one of his favorite senators. The two seem to sup at the same trough, their snouts drawn to the similar slop.

Unless the FEC is completely wrong, Braun attempted a scam worthy only of the most brazen grifters—one that requires some serious brass. The man’s sheer shamelessness astounds.

What makes the irony here particularly biting is that Braun—like Trump—likes to present himself as the tribune of the little guy, the forgotten American.

The senator’s office routinely issues press releases fulminating against the national debt, neatly forgetting to mention that one of the major sources of that debt has been the Trump tax cut that helps folks such as the former president and Braun while further burdening the middle class.

If the FEC report is correct, such forgetfulness on Braun’s part isn’t an accident or an anomaly. It’s a pattern that is the product of a plan.

The senator ran for office as the ultimate Trump acolyte. Like the former president, Braun said that one major reason he sought federal office sprang from a desire to go to Washington, D.C., and “drain the swamp.”

It turns out that neither Braun nor Trump needed to travel far to do such draining.

Wherever they go, it seems, they bring the swamp with them.