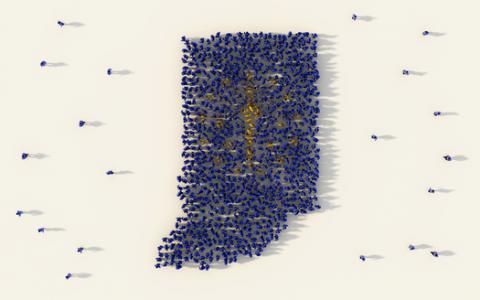 The Freedom to Vote Act, introduced in the Senate, among other measures, would prevent partisan gerrymandering and ensure transparency in the redistricting process. - (tampatra/Adobe Stock)

INDIANAPOLIS -- Gov. Eric Holcomb signed new voting district maps for the General Assembly into law this week, but good-government groups say not only do the maps appear to be gerrymandered, but the process lacked transparency and public input.

Block-by-block census data needed to draw maps for the next decade of elections is supposed to come out in April, but it was delayed until August because of the pandemic.

She pointed out a voting rights bill introduced in the U.S. Senate last month would make a big difference for future cycles.

"Hoosiers really need the protections provided in the Freedom to Vote Act if we are ever going to have an open and transparent process that results in districts that benefit voters and protect communities," Vaughn argued.

The bill would protect against partisan gerrymandering and ensure transparency and public input. Critics of the new maps say they dilute minority votes, especially in cities, and few districts are competitive.

Vaughn added the All IN for Democracy Coalition in Indiana launched a parallel redistricting process this year to highlight the shortcomings of the legislative process, and demonstrate what a more transparent, independent process could look like.

They made recommendations to the Legislature, such as keeping communities of interest together, but Vaughn noted they were largely not taken into account.

Bill Moreau, publisher of The Indiana Citizen, emphasized how important it is to stay civically engaged, and his group, the Indiana Citizen Education Foundation, works to increase the number of engaged and informed Hoosiers.

He said gerrymandering is an insidious and effective form of voter suppression, because it gives people the impression their vote will not make a difference in the outcome.

"Indiana consistently ranks in the bottom 10 of states for turnout," Moreau reported. "And when elections are decided in advance when they're pre-determined by gerrymandering, voters figure that out."