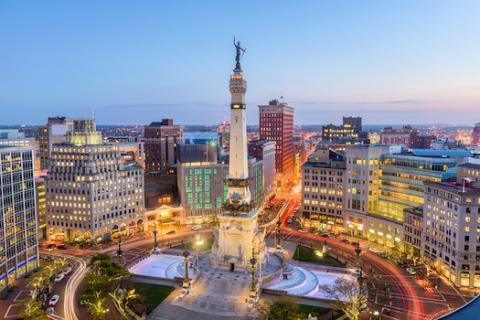 INDIANAPOLIS - A new digital magazine explores the middle class in cities across the country. First up in the series is Indianapolis.

Called The Middle, it's a collaboration by WorkingNation and Lumina Foundation, and notes Indiana's capital is an interesting case.

Manufacturing once dominated the labor market, but jobs have become increasingly technology-based.

Donte Sims, a student and Indianapolis resident who is featured in the series, illustrates the city's crossroads. When he was laid off by Carrier, Sims went back to school to get an electrical engineering technology degree.

"What I'm doing is future-proof, potentially, because having a degree is something that's never going to go away," said Sims. "No matter how old I get, my degree won't expire."

The magazine identifies education past high school as key to bolstering the middle class. It finds by 2025, 60% of jobs in Indianapolis will require some form of postsecondary credential, but only 40% of residents currently have the schooling to meet these needs.

She said people can build degrees with so-called "stackable" credentials. Students can get a welding certification, for instance, and find a job while they finish their education.

Lee said some might come to Ivy Tech as first-generation students and feel overwhelmed.

"They look at the whole degree and they think, 'Wow it's like eating an elephant. How do I get it all done? I need to take it one step at a time,'" said Lee. "And by showing them the certificates or the credentials that are embedded in a program, it becomes much more doable."

Education is an important part of the city's future as work opportunities in Indianapolis change. Sims said he and his girlfriend stress to their kids that it's important to go to school for the right reasons.

See the publication online at themiddle.workingnation.com.


Support for this reporting was provided by Lumina Foundation.