From Hudnut And Lugar To…Pathetic 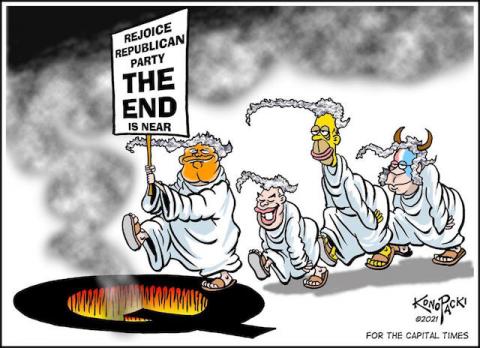 In a recent post, I explained my long-ago departure from the Republican Party by sketching the GOP’s transition from a political party into a ragtag collection of culture warriors, con men and moral pygmies.

I’m certainly not the only person who’s noticed: David Brooks–a conservative-but-not-insane columnist for the New York Times recently bemoaned the fact that Republicans have abandoned principled policy debate in favor of fighting culture wars. And Yuval Levin of the American Enterprise Institute has wondered whether we may see a “policy realignment without a partisan realignment” because Republicans have found so many “cultural ways” to attract votes.

One of the many problems with Republicans’ metamorphosis from political partisans to culture warriors (a nice word for White Supremicists)  is the quality–or, more accurately, the absence of quality–of the political figures the party elevates.

Here in Indiana, the GOP is no longer  the party of able, principled people like Bill Hudnut and Richard Lugar. Besmirching the legacy of Lugar’s long and honorable Senate service, we have Mike Braun enabling the worst of Trumpism, and Todd Young obediently protecting billionaires from taxation and gun crazies from regulation.

Both have voted  in lockstep with other Trumpian “ditto heads” in the Senate–against the recent COVID relief package, against confirming Merrick Garland as Attorney General… essentially, against anyone or anything a Democratic President wants.

Neither of them can point to anything positive or important that they’ve accomplished. Their sole “platform” is that they have faithfully enabled  the GOP descent into Trumpian bigotry and culture war.

Dick Lugar is rolling over in his grave.

And then we have Todd Rokita. I have previously posted about his effort to hold a second, well-paid job while purportedly acting as Indiana’s Attorney General–a full-time job. After the media highlighted that particular scam, Rokita quit that particular private-sector job–but it turns out, that wasn’t the only con he was running.

According to the Indiana Star

Indiana Attorney General Todd Rokita is getting paid $25,000 a year for advising a Connecticut-based pharmaceutical company on top of being compensated by at least one other company for similar work, IndyStar has discovered.

On Wednesday, Rokita filed a financial disclosure form with the Indiana inspector general’s office in which he described his ongoing involvement in 2020 with various companies. He acknowledged being paid by these companies, but his office declined to tell IndyStar how much.

“We have provided all of the information required to be in compliance with the law,” spokesperson Molly Craft told IndyStar over email.

The financial disclosure comes weeks after Rokita faced scrutiny when it was reported that he was still working for the health care benefits firm Apex Benefits despite taking public office.

The paper reported that Rokita is being compensated by business accelerator Acel360, the Indianapolis-based transportation and logistics company Merchandise Warehouse and a pharmaceutical company, Sonnet BioTherapeutics. It was also able to confirm that he is being compensated by another pharmaceutical company called NanoViricides that he began working with in 2020 (in anticipation of his winning his campaign for AG?).

Democrats have labeled Rokita a “walking conflict of interest,” and pointed out that–as a “well-known opponent of the Affordable Care Act”  he’s in position to place not just his political ideology but the interests of his private-sector benefactors ahead of the duties his office demands.

Thanks to the fact that the Indiana General Assembly is part-time, members are allowed to keep their “day jobs.” (That situation has pluses and minuses–members arguably bring  deepened understanding of many issues to legislative discussions, but the potential for conflicts of interest is greatly enhanced.) That same permissiveness doesn’t apply to statewide elected positions. Governor, Lieutenant-Governor, Superintendent of Public Instruction and Attorney-General are intended to be full-time jobs.

But then, these aren’t principled people.