The Problem is Washington, Not North Korea 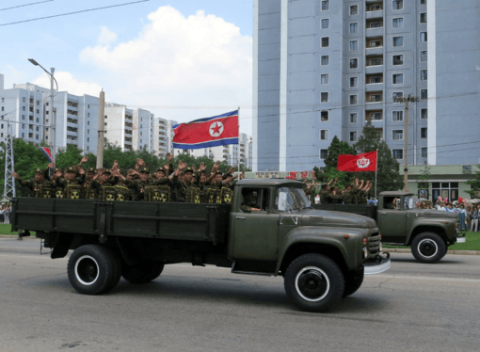 Washington has never made any effort to conceal its contempt for North Korea. In the 64 years since the war ended, the US has done everything in its power to punish, humiliate and inflict pain on the Communist country. Washington has subjected the DPRK to starvation, prevented its government from accessing foreign capital and markets, strangled its economy with crippling economic sanctions, and installed lethal missile systems and military bases on their doorstep.

Negotiations aren’t possible because Washington refuses to sit down with a country which it sees as its inferior. Instead, the US has strong-armed China to do its bidding by using their diplomats as interlocutors who are expected to convey Washington’s ultimatums as threateningly as possible. The hope, of course, is that Pyongyang will cave in to Uncle Sam’s bullying and do what they are told.

But the North has never succumbed to US intimidation and there’s no sign that it will. Instead, they have developed a small arsenal of nuclear weapons to defend themselves in the event that the US tries to assert its dominance by launching another war.

There’s no country in the world that needs nuclear weapons more than North Korea. Brainwashed Americans, who get their news from FOX or CNN, may differ on this point, but if a hostile nation deployed carrier strike-groups off the coast of California while conducting massive war games on the Mexican border (with the express intention of scaring the shit of people) then they might see things differently. They might see the value of having a few nuclear weapons to deter that hostile nation from doing something really stupid.

And let’s be honest, the only reason Kim Jong Un hasn’t joined Saddam and Gadhafi in the great hereafter, is because (a)– The North does not sit on an ocean of oil, and (b)– The North has the capacity to reduce Seoul, Okinawa and Tokyo into smoldering debris-fields. Absent Kim’s WMDs, Pyongyang would have faced a preemptive attack long ago and Kim would have faced a fate similar to Gadhafi’s. Nuclear weapons are the only known antidote to US adventurism.

The American people –whose grasp of history does not extend beyond the events of 9-11 — have no idea of the way the US fights its wars or the horrific carnage and destruction it unleashed on the North. Here’s a short refresher that helps clarify why the North is still wary of the US more than 60 years after the armistice was signed. The excerpt is from an article titled “Americans have forgotten what we did to North Korea”, at Vox World:

“In the early 1950s, during the Korean War, the US dropped more bombs on North Korea than it had dropped in the entire Pacific theater during World War II. This carpet bombing, which included 32,000 tons of napalm, often deliberately targeted civilian as well as military targets, devastating the country far beyond what was necessary to fight the war. Whole cities were destroyed, with many thousands of innocent civilians killed and many more left homeless and hungry….

According to US journalist Blaine Harden: “Over a period of three years or so, we killed off — what — 20 percent of the population,” Air Force Gen. Curtis LeMay, head of the Strategic Air Command during the Korean War, told the Office of Air Force History in 1984. Dean Rusk, a supporter of the war and later secretary of state, said the United States bombed “everything that moved in North Korea, every brick standing on top of another.” After running low on urban targets, U.S. bombers destroyed hydroelectric and irrigation dams in the later stages of the war, flooding farmland and destroying crops……
(From Mike Whitney, counterpunch, 4/17/17)
Read the entire article at